From Medical Care to Matatus 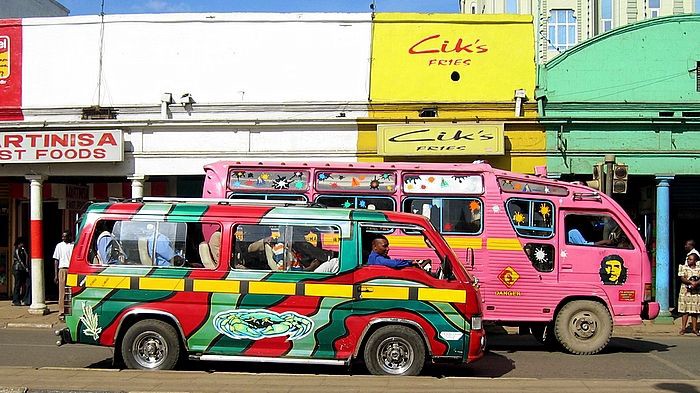 I. INTRODUCTION AND OVERVIEW OF URBAN SERVICES

Urban services — defined as any industry that supports the fundamentals of urban life (e.g., waste management, education, transportation) — already struggle to keep pace with Africa’s population. For example, only 44% of municipal solid waste is currently collected³ and 66% of the continent lacks access to improved sanitation, as defined by the WHO⁴. Population growth will only exacerbate these problems.

Historically, governments around the world have driven urban services. In the United States, for example, FDR created the Civilian Conservation Corps, the Civil Works Administration, the Public Works Administration, and the Tennessee Valley Authority, all of which spent billions of dollars to develop the country’s public infrastructure. In contrast, African countries lag many parts of the world in public spending. In most Sub-Saharan African countries, government spending is below 25% of GDP, whereas the EU spends over 35% of GDP (see Figure 1).

The overwhelming need for urban services to keep pace with population growth combined with the relative gap in public financing has produced a funding vacuum that is ripe for private investors. However, some urban services will be more attractive than others (especially as it relates to venture capital), and we’ve developed a framework to assess this attractiveness.

To evaluate the attractiveness of different urban services, we consider 3 criteria:

When evaluating an industry’s ecosystem, we consider two sub-factors: (a) the physical nature of the ecosystem gaps and (b) the potential for technology to address these gaps.

Sub-factor (a): physical nature of the ecosystem gaps

Across all urban services, some physical assets are required (e.g., utilities require electricity generation equipment). Currently, the gaps in asset bases vary significantly across industries. In transportation, for example, the supply of physical assets is relatively high. If you’ve ever traveled around East Africa, you know that plenty of transportation options exist (e.g., matatus, motorcycle taxis, Uber). Other industries, however, have larger gaps. In Accra, waste is a significant issue, not just because waste collection is still nascent, but also because there simply aren’t enough places to put trash⁵. For industries similar to waste management, solutions can’t just focus on asset efficiency; they must also address asset supply.

Unfortunately for VC investors, growing asset supply is often capital-intensive (i.e. expensive) and therefore not as attractive. In Kenya, a new recycling plant was recently built with the capacity to process 2,000 tonnes of recyclables monthly. And while the NPV of this project may be positive, the upfront cost was an astonishing $45M⁶ and the payback period is excruciatingly long! This is likely why the plant was funded and built by Weeco Recycling Company — a major Chinese organization — rather than by venture funds who typically look to write $1–5M checks with a 5–8 year payback period . For this reason, industries with more developed value chains are much more attractive for early stage investors, as required investment size and payback period are often more in line with fund strategy.

Sub-factor (b): potential for technology to address ecosystem gaps

While industries like waste management need to focus on asset augmentation, others can focus on asset efficiency, which is much more favorable for early stage investors. For example, Babyl — a digital healthcare company in Rwanda allows consumers to use their mobile phones to access remote medical care⁷. Using technology, Babyl has enabled a mere 400 clinics to serve over 2M patients! Doctors and nurses who partner with Babyl are more efficient, as their operations are supplemented by AI to accelerate diagnoses and automation to simplify prescription preparation. This efficiency allows these professionals to treat a larger number of patients. Additionally, the mobile nature of Babyl allows those who might not be located near a health clinic to access essential services. It is these types of industries — those whose asset bases can be scaled via technology — where we are most likely to see Africa leapfrog developed countries, straying from more traditional, capital-intensive solutions in favor of more distributed, technology-enabled services.

While some urban services are better positioned than others to leverage technology, not all of those solutions are desirable enough to entice purchase. Across urban services, consumers internalize “the problem” differently, which in turn impacts willingness to pay.

Thus we must also consider a consumer’s willingness to pay when evaluating investment attractiveness. In this category, we consider two sub-factors: (a) the degree to which industry benefits are in the form of externalities and (b) the payback period for consumers.

Sub-factor (a): degree to which industry benefits are in the form of externalities

Waste management is one industry that struggles because it is perceived as a public good. A clean city, free from trash and sewage, has tremendous public benefits. Indeed, the World Bank estimates that poor sanitation costs Ghana around $290M in productivity each year, largely due to ~19,000 annual deaths caused by poor sanitation and hygiene⁸. However, the tragedy of public goods is that everybody wants them, but nobody is willing to pay for them. In the US, recycling didn’t come into vogue until the late 1980s when a ship carrying garbage — now known as The Garbage Barge — traveled along the Atlantic seafront and became a focal point of American media. The news coverage led many to believe that if they didn’t recycle, America would drown in trash. Only when Americans felt personally threatened by garbage did they begin to change their behavior⁹. For many urban services in Sub-Saharan Africa, getting consumers to internalize these externalities and pay for a public good will be extremely tricky, and will in turn hinder the success of emerging organizations addressing this issue.

Sub-factor (b): payback period for consumers

Similarly, companies selling products with long payback periods face an uphill battle. Education for example faces high opportunity costs. Especially in informal settlements, attending school not only costs money, but comes at the expense of working. When Kenya eliminated school fees in 2003, 2M more students enrolled in primary school, suggesting that many consumers were interested in education as a product, but that the opportunity costs were too high or the payback period was too long to warrant the investment¹⁰.

Urban services with long payback periods (like education or preventive healthcare) can dramatically lower cost to entice buy-in, but subsidized services aren’t great for business sustainability or investors. However, in certain cases these companies can find another willing payer — someone who is not the end consumer. KAINOafrica, for example, is a Ugandan edtech startup that provides a platform for school administration, including at-home learning and assessments for students¹¹. While students are the ultimate beneficiary of the product, it is the schools (and its funders) who pay for the solution.

The final area to consider when evaluating investment potential is resistance to change. Resistance to change is unique in that it does not assess how much a consumer is willing to spend. Rather it assesses whether consumers will adopt a service at all. To assess an industry’s resistance to change, we consider 3 sub-factors: (a) the need for behavior change (b) the expected push back from key stakeholders and (c) the perceived importance of quality.

Sub-factor (a): the need for behavior change

Behavior change is a significant barrier to the success of many emerging organizations. Praekelt.org is a South African social enterprise tackling this issue well. Praekelt.org has developed a product called Dig-It that provides math education via mobile phones¹². What makes Dig-It unique is the human-centered design the company uses to build products. Praekelt.org combines agile methodologies, frequent user testing, and design thinking to ensure products are intuitive and enjoyable. This process involves the customer early and ensures the products are actually something consumers will use. In this way, Praekelt.org suggests that venture funds should not just pay attention to what startups create, but also how they create it, as human-centered design can minimize barriers to adoption.

Entrenched ecosystem stakeholders can be quite motivated to maintain the status quo, as change can threaten these stakeholders’ power and profitability. A recent example is the matatu industry (commuter buses) in Kenya. Startups like Swvl and Little, offering app-based bus-hailing services, entered the market operating under a tours license instead of a commuter license. In September 2019, both companies were blocked from operating in Kenya due to these regulatory violations. According to Quartz, “Little CEO said he wasn’t sure if the decision to blacklist them came from authorities or if they faced pressure from public transport cartels. Matatu owners are part of what’s known as savings and credit cooperative organizations or SACCOs who lobby hard against government directives and have opposed previous efforts at reforming public transportation.” As of May 2020, Swvl has met all compliance requirements of the National Transport and Safety Authority (NTSA) and can resume operations. However, they’ve lost 9 months of revenue in the process. Anticipating backlash and figuring out how to work around strong-willed stakeholders will be essential to ensuring novel solutions are actually adopted.

While some urban services offer more binary solutions where quality is not a huge consideration, for others quality is of utmost importance. It’s also important to note that actual quality and perceived quality are not always the same. In industries like healthcare and education, perceived quality is critical for customer adoption. There is a long history in Africa of “free” NGO-provided services that have ultimately not been effective and in certain cases, even damaging. Similarly, cheap counterfeit drugs is a rampant problem in many African countries. As a result, there is wide distrust and skepticism around products and services in these industries, where thousands of fragmented providers exist and differentiation between high-quality and low-quality is not easy. Even when companies mean well, without the proper communication and trust-building efforts, they will suffer from the reputations of their sectors.

You might be wondering which of our three evaluation criteria — industry ecosystem, willingness to pay, and resistance to change — is most important. While they are all important, we believe that for early stage VC investors, the development of the industry ecosystem is key. As such, we see industries like education and transportation as the most attractive urban services investment opportunities. In these industries, technology has a greater potential to increase efficiency and expand the reach of the existing asset base rapidly. The ability to scale quickly means these industries are more likely to keep pace with Africa’s rapid population growth. For industries like waste management or infrastructure, the rate of development of new physical assets is likely to fall short of the urbanization rate, due to time and capital intensity. These industries are better-suited for public investment from local or international governments or large infrastructure-focused private equity funds.

Ultimately, investors play an important role in shaping Africa’s future. Empowering entrepreneurs and helping to support the development of Africa’s economy is a critical step in the continent’s development that can have far-reaching implications on standard of living and quality of life. Indeed, this is the thesis that drives impact at VestedWorld. In this way, smart venture capital investment in urban services is not only an opportunity for positive financial returns, but tremendous social returns as well.

“Millions of urban Africans still don’t have electricity: here’s what can be done,” The Conversation. April 19, 2018, https://theconversation.com/millions-of-urban-africans-still-dont-have-electricity-heres-what-can-be-done-92211 (March, 2020)